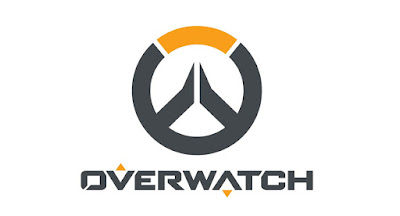 Reviewing any online-only shooter is a tricky endeavour at the best of times, but when it comes from revered developers Blizzard, things get even more complex. As with the majority of Blizzard’s games, Overwatch is subject to change in the same way that the initial release of Diablo III is exponentially different to the current incarnation. As a result, this review will cover the launch version of Overwatch and will be updated in the future should the score be affected.

Overwatch is Blizzard’s first foray into the first person shooter market, but plays like nothing else on console. While the game’s bright colours may exude a child-friendly atmosphere a-la Plants vs Zombies: Garden Warfare, writing it off as such would do it a great disservice. Overwatch features some incredible tactical depth despite an aesthetic lodged somewhere between Pixar and Dreamworks Animation styles. The concept is simple – 6 players fight 6 other players across 12 maps and 4 game types. The quirk is that unlike your usual online-shooter, every player controls one of 21 characters with a diverse range of weapons and skills.

From a giant scientist gorilla (yes really), to a shotgun wielding Grim Reaper-a-like, there is an incredible diversity to Overwatch’s characters. On a basic level, the child in me felt like I’d found a box of old action figures from different eras and was gleefully having them do battle across the globe. On a gameplay level, co-ordination with your team mates and the interwoven ability sets of the characters they choose is critical to winning or losing a battle. The game will suggest combinations of characters to make up a balanced squad, but its not mandatory. Just don’t expect to win if you neglect to use a support class. 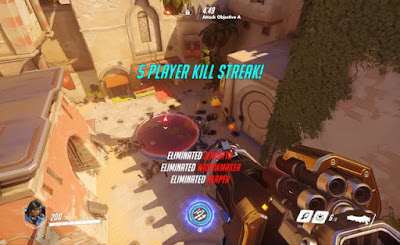 In terms of the minute to minute gameplay, Overwatch can have so much going on that throughout your first few matches you’ll wonder what on earth is going on. Stick with it, however, and the tactical nuances begin to emerge, both for co-operative and competitive play. Mercy, a support character, is able to lock onto a team-mate and transport directly to them to heal them while they protect her. On the other side of the coin, Bastion, the much derided half-robot/half-stationary turret, can wreak havoc when approached from the front, but teleport behind him with Reaper or wall-run with Genji and you’ll soon find that he isn’t so tough after all.

Its this team dynamic that makes Overwatch such an attractive proposition in a world of killstreaks, perks and lone-wolves which populate most online shooters. While each of the characters have vastly different abilities, they all have weaknesses too.

Overwatch’s colourful, vibrant art style also spreads not only from the characters but to the maps as well. All impeccably designed, each one is based on a real world location as viewed through a cartoonist’s lens. Hollywood takes the form of movie studios and sets, and none of them slip into the constant browns and greys of some of the more po-faced shooters. Each features a degree of verticality and nuances which won’t become apparent until a few hours in – for example, Genji is able to run up walls, but some walls on the map may have a sort of “ledge” at the top to impede your progress. Everything feels thoughtfully designed, and yet seems effortlessly put together.

As if to reinforce its values, Overwatch doesn’t feature a team deathmatch mode and actually doesn’t display anyone’s Kill/Death Ratio on the scoreboard. It may seem like an insignificant touch but it ensures that a newer player never feels as if they’re being judged – there is a definite difficulty curve which is a cut above “run, aim, shoot”.

The match types which are featured however do leave much to be desired. “Assault” is a turn-taking attack and defence mode with two capture points, while “Escort” involves moving a payload vehicle from one side of the map to the other with a time limit. A hybrid of the two (imaginatively called “Assault/Escort”) has the attacking team capturing the payload vehicle before transporting it. Finally, “Control” involves holding an area of the map and is played in a best-of-three format. None of these are particularly novel modes, and in a game which revels in being so playful and yet interesting in terms of characters and maps, its disappointing for Blizzard to have dropped the ball on something such as this. While Blizzard is adding ranked play in the near future, I’d certainly hope to see some more game modes, particularly some more interesting ones.

In conclusion, Overwatch does a lot of things incredibly well. Its an accessible and yet beautifully deep online shooter that places all of it’s emphasis on fun. Unfortunately, an anaemic selection of modes ensures that it’s long-term place in your disk drive isn’t guaranteed just yet. 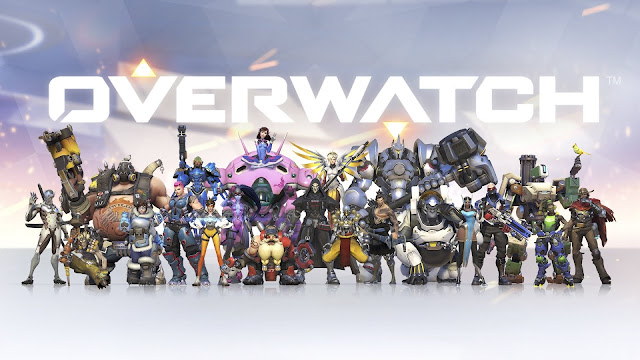