The Games I Bought Consoles To Play

Halo. Uncharted. Mario. Every major console has its exclusives. Being “platform agnostic” is a great way to be able to ensure you don’t miss out on any of the biggest and best titles available, but there’s always that game that arrives for a system you don’t own that pushes you towards that all-exciting of purchases – a new console.
Here are a list of the games I bought consoles for…

Playstation
My first console was a Christmas present from my family after I’d badgered them incessantly having played Crash Bandicoot at a friend’s house. It arrived with Batman and Robin (yes, the tie-in to the movie which almost killed Batman movies) and Formula 1 98, which felt like a strategic choice by my Dad. 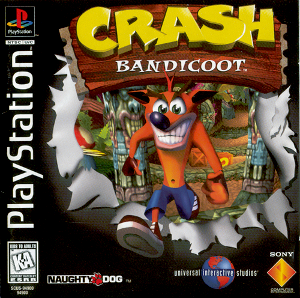 That is one fine lookin' Bandicoot!

Playstation 2
The Playstation 2 was a huge launch at the time, and I found plenty to love with the SSX Demo included in the box. Eventually, however, I bought the game I’d wanted the console for – Metal Gear Solid 2. Having not purchased a memory card for the console in lieu of purchasing the game, I would come home from school and play the first 6 hours every night and get a little further each time. The fact was that the gameplay was that good and the graphics so astounding at the time that I didn’t mind playing the same sections over and over.

Xbox
An avid PS2 fan, my friend invited me over to play an Xbox for the first time when I was about 12. We played Halo’s multiplayer and I knew then that shooters would never be the same. I had been playing Red Faction and the PS2 port of Half Life (both great!) and now all of a sudden I’m taking part in the most immersive sci-fi story since Star Wars, and with a friend no-less. A whistle-stop tour of 3 player PVP multiplayer was the icing on the cake – I’ll remember those warthog headshots forever.


Its now hard to remember a time before having a dedicated "throw grenade" button on console...

Xbox 360
After my PS2 suffered a laser error, I moved "full time" to the Xbox. Having seen the TV advert for Ghost Recon: Advanced Warfighter I rushed out to buy it. Unfortunately the gameplay I’d been shown of a tactical team-based shooter was taken from the Xbox 360 version and the original Xbox version was a by-the-numbers first person shooter. With that, I traded in everything to get the console and the game. To this day, I don’t regret it.

Playstation 3
I played the Playstation 3 for the first time in 2009 – talk about late to the party. The positive, however, was that I was able to experience Uncharted 2. I played through half the game at an ex-girlfriend’s house and was hooked. The characters, voice acting and production values all screamed “Hollywood”, and the gameplay held up its end of the bargain too.  As a result, I bought a pre-owned Playstation 3 with Infamous and Metal Gear Solid 4, and made sure to pick up Uncharted 1 and 2 the first chance I got. Uncharted 2 still stands as one of my top 5 games of all time. All those "finger pressups" paying off...

Xbox One
While I purchased the Playstation 4 first, I didn’t buy it for any other reason than that it was new and shiny. With the Xbox One, however, my mind was made up having played the multiplayer beta of Titanfall. It took some getting used to the fast pace, AI bots and thunderous mechs, but by the time I’d experience three matches I was hooked. Once it was released and packed in free with certain Xbox One bundles, I made my move. Now the Xbox One is my primary console and I’m eagerly awaiting Titanfall 2.