Baby Steps to a Better Me

As you are likely aware I suffer from bipolar disorder. I'm not going to re-list the ways in which it affects me but last night I took baby steps to understanding bipolar more fully. I'm currently writing this in the midst of a wonderful thunderstorm that woke me up at 3am so my sincerest apologies if i'm less coherent than I usually am.

I attended a "drop-in" centre local to me that was set up for people to discuss bipolar (and other mental illnesses) freely with other people that suffer and also those who care for people that do.

Firstly, a big thank you to my Mum. Mum has often been my rock through thick and thin but she acknowledged recently that this has taken a toll on her. She has seen me through the rollercoaster of life and has seen me hit rock bottom this year and also seen me hit dangerous highs. The reason I mention this is that not only was attending this session her idea, she also came with me so that she could learn more about my illness. So thank you Mum, not only for attempting to understand the way my brain works but also for accepting me and loving me regardless of the stupid things I sometimes do or say as a result of it.

Yesterday was a good day. I woke up a bit late admittedly, but I had a very productive day at work followed by a 10k run. I'd been nervous all day leading up to the drop-in centre, but when we got there there was no reason to be - everyone was welcoming and I felt like everyone there had so much information to share with me. I couldn't be more thankful for it.

One thing that we discussed at length was the difficulty of finding a sleeping pattern - I struggle to sleep at night time but on a day off work i'll sleep for 4-6 hours in the middle of the day. Avoiding stimulation half an hour before going to bed seems like a good way of helping my brain relax prior to sleep - so no more Rick and Morty or Archer sessions in bed unfortunately!

A very valid point raised was that almost everybody in attendance had been initially diagnosed with depression as opposed to bipolar. As we discussed, when you're feeling the high of the bipolar you're unlikely to visit the doctors because you feel invincible at times. You also feel the last thing you'd want is to be bought back down to Earth, even if the high can be just as dangerous as the low.

In the hour and a half I was there I learned more about my illness than I could at any appointment with my doctor or through reading any book. I was able to meet people that live their lives with bipolar disorder and my Mum was able to see me open up. In fact, despite feeling so nervous I feel I probably talked more than anybody!

Nothing was off-limits for our discussion and it felt liberating to be able to hear people describe their good days and bad days and for me to be able to relate. Whereas I expected to come out of the session feeling drained, if anything I felt proud of myself for attending and sharing.

On top of last night's session I've been spending a lot of time with a fellow "bipolar buddy" recently and she has helped me really come to terms with things. Every day each of us sees how the other is doing and every day we know we can talk to each other. Frankie, if you're reading this, I appreciate my time with you and talking to you probably more than you'll ever know.

The photo below was taken by my Mum while we walked back and chatted about the session. I'm so proud of her for suggesting we go and it meant the world that she came with us. There is no cure for mental illness, but educating our loved ones can go a long way to not only spot warning signs but also to allow us to know that we are never alone. 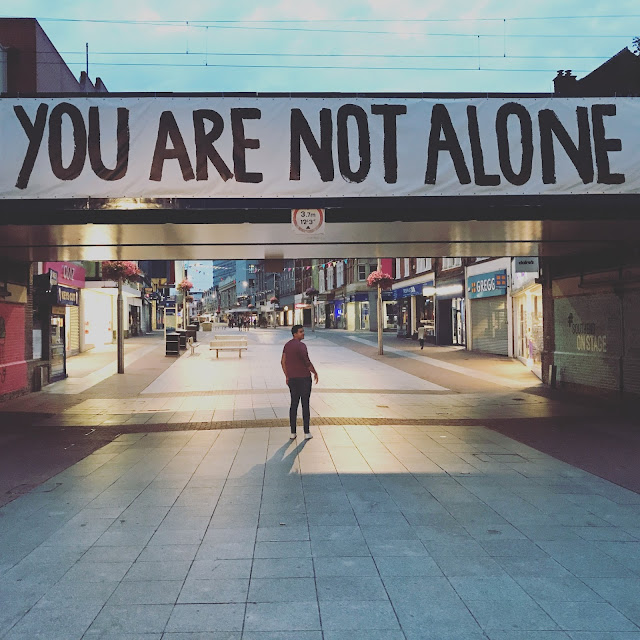