I've always been fascinated by the recent trend of "Games as a Service". For those new to the concept, its where a game receives near constant updates with the intention of pulling you back. It stops you trading the game in, keeps you invested, and in theory, keeps you spending real money on microtransactions. A few games of this ilk have piqued my curiosity in the past (Hearthstone, The Division, Rainbow Six: Siege), while some others have absorbed me completely (Destiny, Overwatch, Destiny 2). One that always eluded me, however, was FIFA's "Ultimate Team" mode.

I could see the appeal, don't get me wrong - building a team using collectible cards purchased in packs? It taps into that youthful exuberance of opening packs of Pokemon cards or football stickers. Trying to build a team with a certain theme to maximise their "chemistry"? As a fan of the Football Manager series, count me in!

But try as I might, I could never get invested in the mode outside of any free packs I obtained through pre-ordering. Part of it was the amount of mechanics that felt stacked on top of each other - player and manager contracts, chemistry styles, coin boosts and FIFA points. There's a hell of a lot to take in for the uninitiated.

The other reason for my ambivalence was simple: I adore career mode. It has plenty of faults (the ability to come off the bench as a player is still conspicuous by it's absence) but for the most part allows me to live out my dream of winning something with Arsenal either as a player (a centre forward, thanks for asking) or as a manager.

With FIFA 18, something changed.

"Squad Battles" allow you to play offline against other players' Ultimate Team setups from around the world. Each match played earns points and at the end of each week, the number of points reached translate into better rewards. It keeps you hooked all week, and even a middling player such as myself can play at a decent difficulty and get some rewards (packs of cards and coins too!).

On top of Squad Battles, daily objectives also tick off just through playing the game. Simple things such as scoring two goals with a player of a certain nationality or applying a fitness or contract item can net anything from a few extra coins to smaller reward packs. In short, FIFA Ultimate Team has me hooked because its the most rewarding Ultimate Team yet. Within a few weeks, my Premier League Squad looks like this: 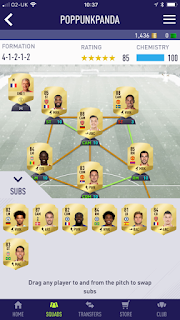 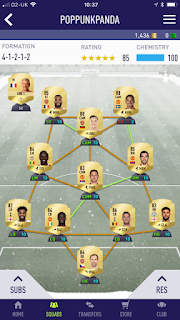 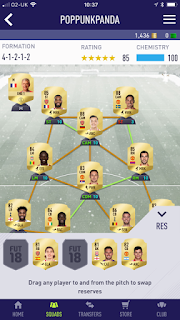 Higher level Ultimate Team aficionados might scoff at my ragtag bunch of players, but i'm very pleased with the progress made!

Have any "Games As Services" kept you coming back? Or are you more of a "Career Mode" guy like I was? Let me know in the comments below!