Hey guys, told you i'd be back with another post this week. This one is two weeks late, but i'm pleased to announce a new addition to the family - the Xbox One X.


Yep, I took the plunge. You'll notice that I didn't post anything about my Playstation 4 Pro that I picked up earlier this year and quite honestly thats something I was planning to get round to but the moment has likely passed. I'm not going to do any comparison photos between PC/PS4/X1X because a) i'm the first to admit I don't have the knowledge base necessary and b) those have been done everywhere else. I'm just going to give you my personal experiences regarding what is (in my mind) a fantastic bit of hardware.

First off, I pre-ordered from Game. It arrived the day after release day and my mate was kind enough to sign for the parcel while I was at work. I got home, unplugged my Xbox One S (farewell, sweet prince) and plugged the X in. The cables are exactly the same as the S which made things nice and easy and my Kinect adapter also works. I'm also a "digital only" kind of guy, so all my games were already moved to a 4TB hard drive - it really is just a case of plug and play.

After a quick firmware install (which reminded me just how far the operating system has come since November 2013), I was greeted with MY home screen - my background, my pins, my friends list. So far, so familiar I figured.

Jumping into "My Games And Apps" I found I was lucky enough to have 10 enhanced games right off the bat - including Dishonored 2, FIFA 18, Gears 4, Halo 5 and Infinite Warfare. Itching to try something in 4K, Nick and I jumped into FIFA 18, which already supported HDR on the Xbox One S. Not a startling difference, although everything looked just that little bit sharper. Grass detail, that most superfluous of changes, was greatly improved, but for the most part the game just loaded faster.

The next day, I tried Infinite Warfare. IW is a game i've written about previously as one of my favorite Call of Duty campaigns in recently memory. I also noted, however, that multiplayer felt devoid of any new ideas. I jumped into multiplayer in 4K, however, and the shine, polish and extra clarity present made everything somehow feel just that tiny bit more fluid. My favorite CoD multiplayer of this generation (Black Ops III) doesn't seem to be getting a 4K patch anytime soon, but this new and improved Infinite Warfare should fill that gap somewhat.

That "New Console Feel" had me eyeing up other "Xbox One X Enhanced" titles and thanks to a deal on Cdkeys.co.uk, I grabbed myself Assassins Creed: Origins at a bit of a discount. AC games have never really spoken to me outside of the second installment for reasons that I won't go into here, but Origins is up there on my game of the year list. While the core concept stays the same (go here, hunt this awful human being, rinse, repeat), the actual gameplay loop has evolved into an action RPG, complete with levelling, stats, gear to find and equip. Gone are tedious fetch quests (for the most part), replaced by side quests with interesting characters. And the best part? How good it looks. The following two screenshots were captured on my Xbox One X using Photo Mode in AC:O and the OS' screenshot utility. 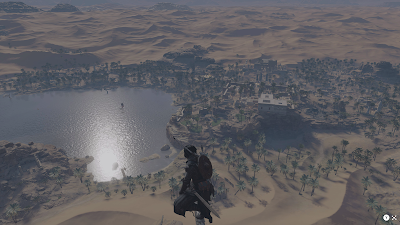 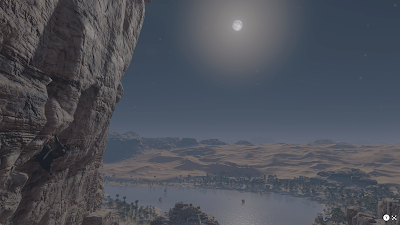 As you can see, the detail captured is nothing short of spectacular.

From Egypt, we then go back to Europe. Specifically, World War 2. Nick and I "gameshare", a process by which when one of us buys a digital copy of a game, the other gets a copy also. It also works on PS4 and is definitely worth a google. In this case, he picked up Call of Duty: World War II. Cutscenes in particular look astounding, but its the small details that blew me away. Bullet casings flying out of a machine gun, the subtle stitching of the fabric worn by soldiers, the way grenades blow dirt or snow into the air as they explode. The first level (D-Day) is a harrowing display of the Xbox One X's power. In multiplayer, the detail is all maintained, but what is most noticeable (hilariously) is that I'm usually the first to load into the map, a good 5 seconds before anyone else in most games. It doesn't matter too much in the grand scheme of things (you're still frozen in place until the countdown timer reaches zero), but its impressive to see the real-world results of that extra processing power.

The last title I've been able to play on the machine recently is WWE 2K18. Firstly, the game looks INCREDIBLE when focusing on the wrestlers themselves. Individual beads of sweat can be seen and every minute detail on each superstar makes each more recognisable than the last. I will say, however, that the game's graphical prowess don't make up for some incredibly wonky animations at time but that said, its still great fun to throw your online buddy through a Hell In A Cell.

With all of the above in mind - is the Xbox One X worth the price of admission? For me, its a resounding yes - if your games support Xbox One X Enhancements. Its my understanding that the console will boost non-enhanced games somewhat, but if (like me) you want to get the most out of your 4K TV, its worth checking the compatibility list. A few upcoming patches have me excited, notably The Witcher 3 (the wait is killing me!) and Destiny 2. A proposed 4K patch for Skyrim does less for my excitement but it might get Frankie playing! Improved load times are also great, and things that you wouldn't expect (such as adding creation parts to my custom superstar on WWE 2K18) will be a lot breezier.

Finally, a word on the console's appearance. I think the Xbox One X might be the best looking console i've ever laid eyes on, to the point where it almost feels wrong to bury it in my entertainment centre. The matte finish screams "premium" and while it is marketed as the smallest Xbox ever made, the difference between the X and the S are entirely negligible. What is noted, however, is the added weight of the console owing to the density of the components within the case - my console stays at home but if you're likely to carry it to a LAN party at a friend's house, you're likely to find you'll be getting quite a workout every time you put it in a backpack.

So there you have it, my thoughts on the Xbox One X. Did you pick one up? Let me know in the comments below.