Hey everyone, back again!

Been a busy time recently (selling/buying a place takes a lot of time and a lot of paperwork but its getting there) and I'm trying to find my fitness again following the surgery (also getting there - lots of running!). I'm also back to work which is nice and I've now had four articles published on Squarexo.co.uk!

While I was off work, I took inventory of my desk setup with the idea of making it more of a workstation. I had planned to sell my beloved iMac before deciding against it - so this process was in two parts.

Firstly - trying to build a "laptop docking station" was a pain. I have a 2014 MacBook Pro with a pretty good spec - MacOS gets the most from the hardware thats in there and I'd planned to hook it up to a screen and see how that panned out.

In reality it was a system full of irritation and compromise. Little idiosyncratic touches like needing to open the laptop to hit the power button despite wanting to keep it shut and running entirely through an external monitor. The lack of ports on the MacBook necessitated a USB hub which I connected an external keyboard and mouse to but even then, the laptop seemed to be struggling to pump everything through the HDMI port, especially since this can only be done when the MacBook is charging via Magsafe.

One thing that I was pleased with was the screen itself. Amazon's sale meant I managed to pick up a 23 inch LG monitor for a reasonable price and given that it isn't as large or tall as the iMac display I grabbed a desk-tidy which neatly holds my laptop case and keyboard. This combo meant that everything felt nicely optimised for my height and while the monitor's resolution is "only" 1080p, its nice and bright with thin bezels.

In terms of holding the MacBook Pro, it'd easily fit snugly beneath the screen but I'd had my eye on a stand for a while so picked up this one. This features a couple of different inserts to suit varying laptops, and my MacBook feels secure enough that it isn't going to tip over or slide off the table.

The temperature of my MacBook Pro and my worry about leaving it on standby in the way I do my iMac meant I soon turned to ol' reliable but grabbed a Thunderbolt to HDMI adapter to enable the iMac to be connected to the aforementioned monitor. The result has been great - it took no effort to connect the two and the arrangement was simple to change. Essentially I can now run a Youtube video on the LG while playing a game on the iMac display, or do some blogging such as this whilst having my podcasts playing on the other screen. In fact, despite the 27inch iMac display (at a 5k resolution!), I genuinely think I'd struggle to go back to not having the extra monitor.

Other items on my desk are a couple of Dragon Ball Z Pop Vinyls that Frankie got me and an iPhone stand which allows me to charge my iPhone via the iMac's USB port.

The result is this: 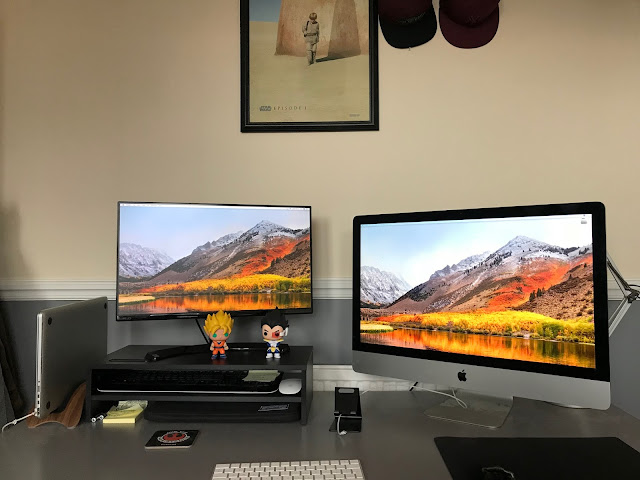 What do you think? For all of the failings of The Phantom Menace, I love that artwork. I also hang my Snapbacks up there too!

If you guys like this kind of content I'll do a full tech layout of the new flat once I've moved. Everything crossed it'll be soon!

NOW PLAYING: Counterparts - You're Not You Anymore