God of War - A Review 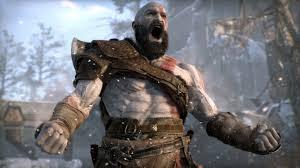 It's difficult to know where to start when reviewing a game such as God of War. Part-sequel, part-reboot, there is nothing quite like it in terms of lineage - even the similarly positioned Mass Effect: Andromeda was (at least in theory) the next chapter following a trilogy I'd loved. God of War's predecessors, spanning multiple Sony consoles, had always been good games even if I wasn't that interested myself.

Imagine taking everything about a franchise and changing it, after an 8 year hiatus. Imagine if Star Wars removed lightsabers and space combat, or Marvel movies removed all the fun. This is what Sony Santa Monica have done, and it not only works - it changes the game for what a blockbuster videogame looks like in 2018 and beyond.

A note on spoilers - this review will be SPOILER FREE. There are so many surprises and small moments of beauty in God Of War that to spoil them wouldn't just be unprofessional - it would be downright cruel. That said, if you're planning to go into the game with no prior knowledge, do not read this review!

Lets begin with the biggest surprise of God of War - Kratos is not only likeable, but relatable. A man who's previous ambition in life was to destroy everything even remotely linked to the Greek Gods now has a different set of priorities - hes a father to a young boy named Atreus. Rather than constantly beat you over the head with this new character dimension, the developers use smart writing, animation and musical cues to allow this relationship to develop naturally.

The narrative setup is one of endurance - following the death of Atreus' mother, he and his father travel through the Norse wilderness to scatter her ashes from the highest peak in the realm. Along the way you'll feel the entire range of emotions possible - you'll laugh, you'll ponder, you may even shed a tear.

This emotion is bought to life by incredible facial animation, not just on the dynamic duo themselves but the characters they meet. Voice acting is exemplary in a way not seen since The Last Of Us, with every character feeling like a person rather than a quest marker. In fact, I haven't yet found any fault with the presentation of the game short of some clothing not sitting well with the axe on Kratos' back. The game is stunning.

The Leviathan axe is more than a weapon in God of War, it's a tool. Smart puzzles use it's freezing ability, but combat is where it really shines. With multiple skill trees and elemental options in the form of runes, the axe can be upgraded to allow for an insane variety of kills. Combined with the new "over the shoulder" camera angle, every victory feels earned - button mashing won't get you far, and you'll need to use all the abilities at your disposal against a variety of enemies.

Another note on the camera placement is that, as preview coverage suggested, there are no cuts. From the main menu screen right through to the credits you see what the developer wants you to see. Every surprise is perfectly framed, and every highlight-reel moment sticks long in the memory. I haven't seen anything quite like it and yet I'm confident that we'll see it a lot more in the coming years, such is it's impact on storytelling.

For the first time in the franchise, God of War allows for exploration - an invitation you'd be foolish to ignore. Some of the most fascinating lore in the game is it's own reward, but the benefits can be tangible too - stat boosts, armor and weapon enhancements are all there for the taking. In fact, earning new gear is essential for some of the tougher fights in the game, although many are optional - allowing you to improve your skills before returning.

In truth, there isn't a lot else I can say about God Of War without spoilers, and so I'll leave it as this: fans of the franchise will love it. New fans will love it. Fans of single-player story-driven games will love it. If you play videogames, you will love it.

It's been a long time coming, but the Ghost of Sparta's return is one you'll likely never forget.