If you read the last post, you'll know I recently switched out my iPhone 7 Plus for the iPhone X. Essentially, the deal was too good to pass up!

The iPhone 7 Plus was an odd phone for me, because I didn't really want it. I'd bought myself a Note 7 only to have it re-called (TWICE!) due to concerns with overheating, and I went back to Apple with my tail between my legs. It was a fine phone, but it didn't do anything new. In fact, it was almost exactly the same as the iPhone 6 i'd had previously (other than the obvious difference in screen size).

While not the revolution I'd hoped for, the iPhone X feels like a phone from 2017/2018 as opposed to feeling like the same old iPhone. 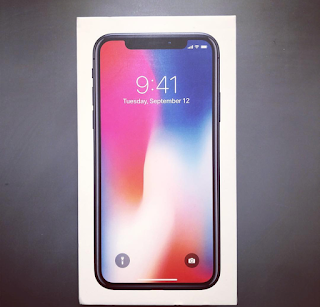 Lets get to the main attraction: that screen. The first OLED display in an iPhone, content really pops off the panel. In fact, on-screen items almost feel like they're floating on the glass. It's the first time Apple has come close to anything offered by competitors (maybe due to Samsung manufacturing the display!).

While marketed as "edge to edge", there are tiny bezels on each side and the now-infamous "notch" on the top of the phone. I'll be honest, the notch hasn't bothered me in the slightest - I actually like the way it divides the two "ears" at the top of the screen so that they can display separate information and means it's easier to define the parts of the screen where you can access notification centre (left) or control centre (right).

Of course, the headline reason for the notch's existence is Face ID. This replaces TouchID which has featured since the 5S in 2013 (albeit improving year on year) and is sure to take some getting used to. In fact, I keep reaching to where the home button used to be in order to unlock my phone - in the time it takes me to correct myself the device has already read my gormless mug and unlocked itself.

It isn't perfect though - sunglasses throw it off, and perhaps most irritatingly for those of us who work at a desk, it's harder to unlock and send a quick text while the phone is laid flat.

The most surprising thing about my 5 days with the iPhone X so far, however, is the size. It feels positively minuscule compared to the iPhone 7 Plus. As someone that has large hands and prefers a big phone, this has left me baffled as to how the screen could possibly be bigger than the previous phone - but it is. In fact, the screen size from my older phone to my current one is just 0.3 inches, but the lack of a "chin" makes it feel wondrous in the hand (oo-err).

Watching Youtube content doesn't feel all that different to how it did before until you pinch to zoom, removing all borders (except the notch). Playing games feels a lot more immersive as well, something I didn't really do a lot of on the 7 Plus.

One thing I HAVE done a lot of with my iPhone in the past is take photos. In fact, a lot of what I do is shared to social media on a near-constant basis. I don't know why, I just enjoy it. In any case, the camera of the iPhone X blew me away entirely. Check out the quality of these snaps:


I'm not a photographer by any means, but I think you'll agree that these look great!

Following on from all of this, lets talk performance. iOS 11 was a shambles on my iPhone 7 Plus. It lagged constantly, the keyboard would stop working for no reason, and i'd be constantly re-starting applications when they failed to load. Now? Buttery smooth throughout. Don't get me wrong, i'm not a fan of the "long press to close apps" part of the new app switcher, but everything else is great.

Speaking of the app switcher, you're probably wondering how to do things like "go to your home screen" and "open recently used apps" - this is all done using gestures. Swipe up to go home. Swipe up and hold to go to the app switcher. Slide your thumb along the bottom edge to change apps quickly, and I've already mentioned the notification/control centres above. Combined with 3D Touch which returns, you'd think the change would be overwhelming and you'd be right - in fact, i'm only just getting the hang of it after a few days, such is my experience with iPhones. Stick with it, however, and it will all click into place. Or slide into place I suppose I should say.

In conclusion, the iPhone X feels like Apple playing a fair amount of catch-up - other manufacturers have comparable features, bigger screens, and better cameras. But as a sum of it's parts, the iPhone X excels as the best iPhone ever made - its just up to you as to whether that means anything to you.