While I could never be described as a man of few words, I've kept fairly quiet over the last few hours.

Last night was the definition of bittersweet. We said our goodbyes to our brother again, and did our bit to make the world a better place.

Raising over £1000 for CALM was so far above what we expected. We cannot thank people that bought tickets enough, or those that donated. By our rough impressions we think there were around 150 people present last night - easily one of the most popular shows Chinnerys has seen from local bands and without a shadow of a doubt the most engaging, powerful and emotional show we've ever played.

The show had been months in the making, and we have so much thanks to give. To Chinnerys, both prior to the event and on the night itself, being flexible with the venue hire out of respect for the occasion and also with them having known Tom.

We were so blessed to be supported by three incredible acts, who battled traffic to make it to the show just about on time. Firstly, to Laurence Crow - opening a night such as this was never going to be easy, but you made it look effortless. Pessimist, you took Southend by storm - the last show we played with you was the last show we played with Tom, and he loved your sound. Last but not least, State of Millenia are a band we know incredibly well - upon reforming at the start of 2017 we've probably shared the stage about half a dozen times, and this one felt most special of all. To all of you - thank you for understanding our grief and offering your support throughout the months following Tom's passing.

I'd like to give thanks also to my bandmates. We're a close-knit group, and we speak every single day. No one said it, but I think we all knew yesterday was going to be difficult. It hit me so hard first thing in the morning that I broke down in tears, but I know I wasn't the only one. We lost a big part of ourselves when we lost Tom.

A special mention to Ant. After much deliberation, we decided to continue making music - at least partially as a coping mechanism. Not knowing how to go on, we found Ant who has taken to playing the drums for Counties effortlessly. He's been a constant shoulder to lean on for all four of us that worked with Tom and I am so grateful for the way the crowd has taken to him also. Its a near impossible task to not only join a band in these circumstances, but to shoulder the collective grief we will all share for the rest of our lives.

Finally, a thank you to family. To the Heward family, you have kept us strong. Iain, Bev, Dave and Oliver have been incredible, and the love you have given us is so appreciated. Without your strength and resolve, we may not have managed to put the show on last night. Your words inspired us and the audience to live as Tom would've wanted - to the max. To our own families, thank you. From late night phone conversations to being there last night, you have helped us process our grief little by little on a daily basis.

After a usual show, we usually pack up and get off stage immediately. Last night, after the end of our set, we were just lost. We've worked so hard to prepare for last night - Ant went out and bought a merch table, James and Tom stocked the green room, Rob and I manned the door. I went through so many drafts of the setlist and my speech that I've been waking up and changing the order at 4am for the last two weeks. What do we do now?

We'd love to say we have more shows booked, but we have things in the background we're working on. What is important is that Tom will always be a huge part of what Counties was built on, and we will never forget him so long as we live.

On a personal level, finishing the speech and then our last track, I just felt empty. The overwhelming sadness that I've kept hanging by focusing on last night came crashing over me like a wave. It hit so hard I could barely stand, almost beside myself next to the stage. To everyone that came up to tell me we made Tom proud, or to tell us they're there for us, thank you. You cannot fix our broken hearts but you showed that people are there to pick up the pieces. I hope time can do the rest.

From all of us in Counties, thank you. 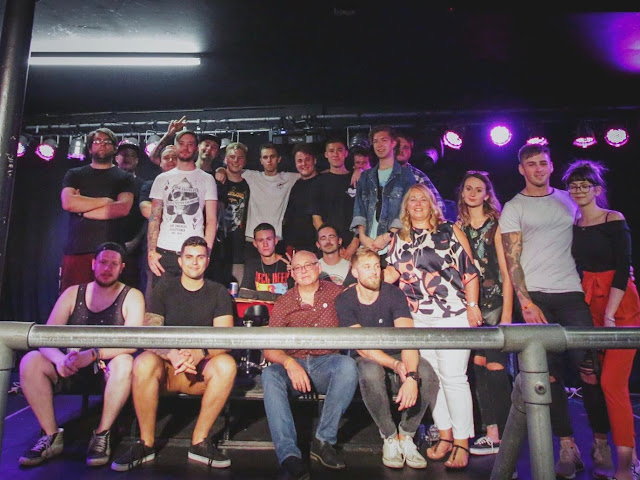