Learning To Love The Skin I'm In

Almost three weeks since my last post. So much for keeping things more organised!

There are reasons, of course:

1) The room I use as an office is STILL full of boxes, even though I've been living in my new flat for almost two months.

In any case, the final bit of furniture for my new home arrives tomorrow and it'll allow me to clear my boxes - hooray. This'll then allow me to show off the flat in a post, but perhaps most importantly i'll be able to write again!

On the subject of writing again, I'm hoping to be writing for a second outlet shortly - news on that as and when!

If you are missing me, I've taken to putting up little song snippets I record at home on Instagram over @lloydcoombes.

Today, I did what I always do. I woke up, rolled over, grabbed my phone and read through social media while feeding the cat and getting ready for work. Facebook's "Memories" section had a little blue dot by it, so I wondered what self-indulgent drivel 26 or 27 year old me had written (my profile is less than 3 years old as I created a new one to avoid an ex...). 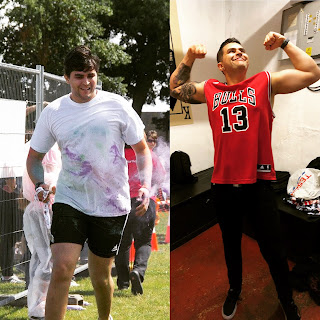 The 2016 photo is of me midway through a charity run. It was only 5K, but I was really proud to have finished around 5th. It was a really fun event, and something I really should be doing more of.

The 2018 photo was taken backstage at the last gig I played. Taking the haircut, tattoos and cleanly shaven face out of the equation - I almost didn't recognise myself.

2016 was a weird year on a personal level, but i'd been putting in time at the gym up until the start of summer and was feeling good. I trained well with weights but neglected cardio for the most part, hence my surprise at finishing so strongly in the aforementioned run.

2018? I've hit the gym when I've been able to, but between work, band, recording, gigs, spending time with Frankie, friends and family and moving house, its been less obsessive than it was back then. And yet, somehow, I would argue I look better. I certainly feel better.

Its simple really. I think, somehow, i've found peace with my appearance. I look just fine the way I am in 2018. Through my weight fluctuating, the bullying, the emotionally abusive relationships - I'd lost sight of the fact that I am, as we all are, beautifully individual.

I used to look at people and think "wow, I wish I looked like that", or "should I look like that?". They say comparison is the thief of all joy and in my case that rang incredibly true - I couldn't appreciate myself because I wasn't slim enough, I was too tall, I don't have abs. But actually, when I see a visual comparison like the one above I realise that maybe I'm not doing so bad after all.

Anyway, expect some more posts over the weekend and into next week!

As always, thank you for reading,

Now Playing: Counties - If Forever Is What It Takes (We did it!)