It's that time of year again... FINALLY! 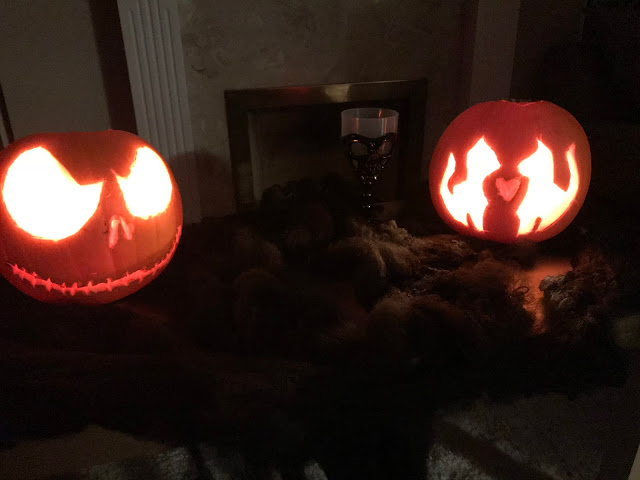 I love Halloween. I don't trick or treat (never have), and I don't often dress up for parties (last Halloween party I went to was one my housemates threw in 2014, although it was admittedly the best party I've been to!). Halloween for me is the time to turn the lights off, draw the curtains, and get cosy on the sofa with the duvet with popcorn. It's also my girlfriend's birthday, so I look forward to it for that too!

With all this in mind, I thought I'd list my top twenty spooooooooooooooky movies. Not all of these are horror movies, and some are combined entries...

A cultural touchstone of movie magic, Alien's release owed a lot to Star Wars making Sci-Fi a viable genre just two years earlier. A claustrophobic jaunt through the now iconic Nostromo, the use of practical effects has become legendary, as has not telling the actors about the now iconic "chestburster" scene. Add to that a badass heroine and you have the hatching of a franchise.

The Cabin In The Woods

A double pick here, The Conjuring and it's sequel are the modern masters of the jump scare. Be it the "clap clap" scene from the original, or that bloody "Nun painting" one in the sequel, James Wan delivers terror and foreboding in every frame. The fact that the movies are based on actual events make things even scarier.

Infamous for the death of it's lead actor on set, Brandon Lee's final performance is that of a vengeful spirit of a man who was murdered along with his fiancee the night before Halloween. A dark movie in tone and visuals, The Crow is just as much a skewed take on the superhero genre as it is a thriller, with the titular hero out for revenge and vigilante justice.

The first instalment in the genre's longest running franchise, Friday The 13th seems quaint by today's standards - teenagers being slaughtered was so 1980 - but can stand machete-to-machete with the best. The reveal of the killer and the final jump scare live long in the memory after the credits roll.

Arguably more thriller than horror, Get Out is a masterclass in subverting expectations. We're dragged along for the ride as lead character Chris uncovers the mysteries of his in-laws, toying with expectations about what revelation could be next. A fairly short film at 103 minutes, it's concise and taut throughout.

Who doesn't like this movie? I've not met anyone yet. Ghostbusters is expertly cast (Bill Murray, Dan Aykroyd, Sigourney Weaver just to start), expertly paced, and expertly directed. It has something for everyone - some spooky parts, some comedy, and some action. Also, an unpopular opinion i'm sure, but I really enjoyed the all-female successor.

I have a soft spot for the Rob Zombie version of Halloween, but nothing really comes close to the original. From the opening first-person murder scene, it's clear that it'll be an uncomfortable watch. The emotionless mask of Michael Myers remains disturbing even today.

Another James Wan double (and not the last we'll be hearing from him on this list), Insidious is a surprisingly personal tale of a boy lost in the spirit world. As touching as that sounds, it (and it's sequel), are chock full of jump scares and nightmare-fuel. Insidious 2 wins the rare distinction of actually being a horror sequel that lives up to expectations set by it's predecessor - it may even be better.

The nineties miniseries may not have aged particularly well, but 2017's IT is, in a word, incredible. Smart modernisation of Stephen King's novel, as well as the removal of some controversial elements, make the story feel contemporary. Bill Skarsgard's Pennywise is terrifying, and yet mesmerising, while some of the effects are genuinely chilling. Roll on Part 2!

The original "Creature Feature", Jaws tells a simple story, but remains iconic for so many reasons. The music (daaaa-daaaa), the monster, and smart cinematography make Jaws a classic. The original Summer Blockbuster, you won't go into the water again.

A Nightmare On Elm Street

The movie monster with the most one-liners, Robert Englund's Freddy Krueger is as famous as they come. The stripes, the hat, the claw - he's instantly recognisable and with good reason. Skip the 2010 version and go back to the original for some nice gory practical effects.

The Nightmare Before Christmas

The only movie on here that qualifies for two holiday seasons, The Nightmare Before Christmas is an animation masterclass twenty five years on from it's original release. A musical isn't much good without music, and luckily songs like "This Is Halloween" and "Jack's Lament" still have me singing along every year.

While the franchise at one point seemed to be close to over-saturation (unsurprising given the profitability of the first movie), this haunted house/found footage mashup builds slowly before ramping up sharply. It's not a long movie, but there's a sense of unease every time night comes as your eyes dart around the screen to spot what could be moving. The second film is also excellent, happening in parallel with much of the original.

James Wan's directorial debut, Saw is a movie that kick-started an increasingly bloated franchise that lost it's way, but stands alone as an expertly paced thriller. There are jump scares, yes, but Saw is perhaps most terrifying because it doesn't seem outside of the realms of possibility. The ending is phenomenal, and the song "Hello Zepp" from the soundtrack was so popular it found it's way into other movies and trailers.

A "slasher" with brains, Scream was parodied so much in "Scary Movie" that the two will be forever linked. Scream tells the unremarkable story of a killer on the loose, but does so with such style and panache (as well as comedic jabs at the genre) that it ends up as so much more than the sum of its parts.

Shaun of the Dead

A movie I know like the back of my hand, Shaun of the Dead is the pinnacle of horror comedy. It's a romantic comedy with added zombies, and has all of the heart of the former and plenty of gore from the latter. It wrestles with consequence, growing up, and where to go for a nice romantic meal ("the place with all the fish") while also providing action and laughs aplenty.

Stephen King famously vehemently disagreed with Stanley Kubrick's take on one of his most iconic works, but the movie itself is perfectly crafted. There are so many scenes that live long in the memory - the bathtub lady, the twins, the elevator doors. The visuals are so evocative as to be burned into your memory - you'll never forget watching Jack go mad.

The Silence of the Lambs

The movie that made M Night Shyamalan a household name, The Sixth Sense is a difficult film to categorise. It isn't a horror, it's sort of a thriller, and it's also partly a mystery. There are some disturbing scenes, and the much-vaunted twist ending has lost it's edge after becoming a meme, but if you haven't seen it you'll likely watch it at least twice.

What are your fave spooooooooky movies?