It's "New Tech" time! This time I'm giving my impressions of the iPad Pro (2018), a device that had me very excited when it was announced a few weeks ago. Oh, and this is for the 11 inch version! 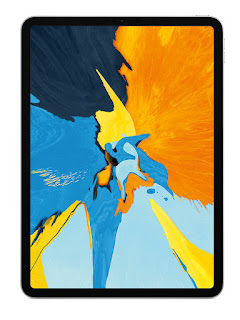 I've owned a couple of iPads before, but I never really understood why. At their core, and at a deeply oversimplified level, they're just huge iPhones. Even the ones I owned were eventually sold on simply because I couldn't find a place for them in my workflow or even just in my personal life. If my phone is with me 99% of the time, why would I need what is ostensibly a larger phone just to carry out the same (or at least very similar) tasks?

The iPad Pro lineup has long been an oxymoron. The words "iPad" and "Professional" never gel quite right - iPad has long been a primarily consumer based product. It's great for Netflix, for reading and for certain games, but it isn't the kind of thing you'd type up business documents on or use to send business emails with complex attachments like spreadsheets.

So why get an iPad at all?

The iPad Pro (2018) is a game-changer. Everything is a step up from the previous iteration - at the most basic level it sports a new modern design which is clearly influenced by the iPhone X, with rounded edges to the display, no home button, and thinner bezels. Face ID makes it's iPad debut, as does USB-C - more on that later. It also features the best speakers I've used on a mobile device, period.

On the performance side, it now benchmarks comparably to the latest Macbook Pro laptops, but in a massively reduced form factor. The numbers really do speak for themselves here, as illustrated by the chart below.

What this all translates to is the most powerful tablet available today, and arguably the best looking. What's not to love?

The simple answer to that question, is iOS. While iOS has made strides in recent years (the addition of a Files Browser, a dock, more robust multitasking), it still hamstrings the iPad Pro. iOS 12 brings some much needed stability improvements, but it still feels like a device at odds with itself - a tamed beast. For all of it's potential, iOS weighs on the device to prevent it reaching the heights it could, and perhaps should.

Why did I get an iPad?

I sold my MacBook Pro this month. It was a mid-2014 model, and was without a doubt the greatest laptop I've ever owned, filled with all the ports, pixels and horsepower anyone could ever want. With the arrival of my iMac 5K, it had been marginalized, however. That said, I still wanted to get a device I could write on, watch Netflix on, and do some light songwriting on.

The iPad Pro meets all of those needs and then some. In fact, it's now my main device for web-browsing, Podcasts and browsing Reddit. Man, I love Reddit.

My latest piece for The Daily Star was written entirely on my iPad Pro, with screenshots grabbed from my iCloud. I was able to put Slack on the side of my screen so I could respond to my editor, and all of it was wrapped up and sent from Apple Mail. No keyboard or Apple Pencil used, just the device.

I downloaded a few apps to test the device and was pleasantly surprised by Novation Launchpad. I've been playing around with it to create some electronic music and am super pleased with how it's sounding.

There have been some disappointments - while most of the apps I use are updated for the new display size, there are a surprising number of popular apps that aren't. Hearthstone and Sky Go are among the worst offenders here - hopefully this'll be patched soon.

USB-C is a double edged sword, too. While you can hook the iPad Pro up to your DSLR camera or external monitor, there are caveats. For example, the monitor is limited to mirroring the display unless developers make allowances for it, and the included USB-C to USB-C cable means that while you can charge your phone from the iPad, you'll need a dongle to do so. One positive is that USB-C seems to be becoming the standard, so while you may want to buy a spare charger, you may have one lying about. It's super cool to be able to charge the iPad or my Switch from the same cable.

Should you get an iPad Pro?

The iPad Pro is an incredible machine hampered by a restrictive operating system. It suits my use-case just fine - a combination of business, pleasure, and Reddit. I'm hoping to grab the Apple keyboard and Pencil for the device to make everything a bit smoother, but I'm really pleased with it. Also, the 11 inch is a perfect size for me - it's portable, but big enough for everything to be nice and clear.

Your mileage may vary, however. Multitasking remains limited, as does the Files app - two areas that still cannot be beaten on a dedicated PC. It's a case of weighing up your needs against the device's limitations, hopefully something that iOS 13 can address next year if the rumors are true.

For now, though - I'm going back to my weirdly proportioned game of Hearthstone for a few rounds.